The Art of Dissent

The Art of Dissent 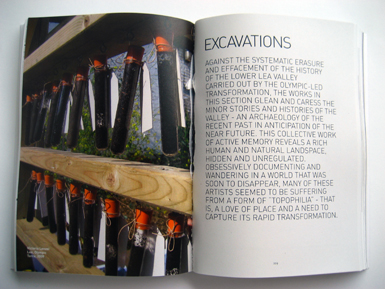 Subtitled 'Adventures in London's Olympic State', 'The Art of Dissent'  is a compendium of images and words testifying to their makers' and authors' refusal and resistance to the Olympics-led transformation of East London.

The book was edited by Isaac Marrero-Guillamon and Hilary Powell, and published by Marshgate Press. It brings together work by Alberto Duman, Laura Oldfield Ford, Lara Almarcegui, Polly Braden, Iain Sinclair, John Wynne and many others.

"The contributors gathered in this volume have … acted in myriad ways – subtle, militant, analytical, passionate – upon the arrival of the Olympic machine. In doing so, they have challenged a key element in the production of consensus around the Games: the division between those who may speak and those who may not, between that which can be discussed and that which cannot. This is a book made of words that were not meant to be heard, images that were not supposed to be seen – a slit in the consensual space of London 2012" (introduction).

A run of 1,000 copies was printed on Calverts KM8000 digital press, using 115gsm Cyclus Offset, a 100% post consumer recycled paper from Dalum in Denmark, with an 8-page gatefold cover.

'The Art of Dissent: Adventures in London's Olympic State'