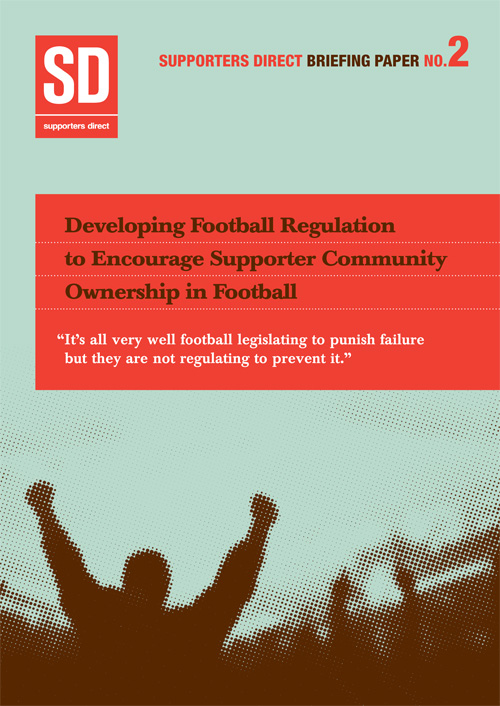 Supporters Direct promotes sustainable spectator sports clubs, based on supporters’ involvement and community ownership. Its members are, in the main, grass roots supporters’ trusts in football and rugby clubs.

We’ve just designed and printed the first two in a series of four heavyweight papers aimed at influencing policy thinkers and government. The first paper was ‘Developing Public Policy to Encourage Supporter Community Ownership in Football’. Written by Substance, and with involvement from co-operative law specialists Cobbetts LLP plus research input from three universities, these publications will take SD to a new level of influence and respect as an advocate for co-operative ownership and control of sports clubs.

SD Chief Executive Dave Boyle gave us a succinct brief: we needed to create cool but lively, readable pages. Visual style: make it German. As fans of German magazine design ourselves, we thought we knew what he meant. The other requirement was to come up with an unusual format which would be cost effective in production terms.

The two reports, at 44pp and 52pp, were designed, laid out, proofed, amended, printed and delivered in record time, hours before a House of Commons launch on May 10th – which went really well, by all accounts. One MP commented to our client on the high production values, saying that to him it looked and felt … quite German.

You can download a complete PDF or order a copy of either report from the Supporters Direct website.