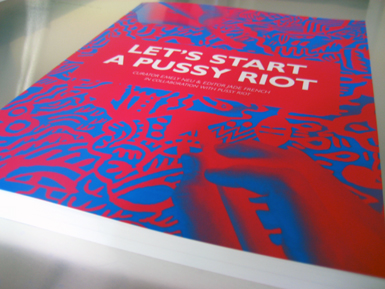 In 2012, three members of the Russian feminist punk-rock group Pussy Riot were arrested and imprisoned after performing an anti-Putin protest song in a Moscow church. Politicians, artists and musicians worldwide condemned their treatment by the Russian authorities.

A book- ‘Lets Start A Pussy Riot’ was created linking together the events leading up to and after the group’s arrest.

Curated by Emely Neu, edited by Jade French, published by Rough Trade Records, and printed by Calverts the collection of artists’ responses (including Peaches, The Knife, Billy Childish, CSS, Jeffrey Lewis and members of Sonic Youth) was launched at this year’s Meltdown festival curated by Yoko Ono, and is now on sale from Foyles Royal Festival Hall and from the Rough Trade website .

All profits from the book will go directly to Pussy Riot.