Channelling the seditious energy of printers from the 1600s, Calverts printing cooperative has been putting the activism into Bethnal Green since its 70’s punk rock beginnings.

Calverts may be the last of its kind in the area, but the print trade’s radical roots reach deeply into the East End’s fabric. In fact, if anything could encapsulate the identity of Bethnal Green, Calverts might be a hot contender.

Calverts is a design and print cooperative, whose independence from corporate pressures allows for the increasingly rare autonomy to produce work that is subversive, socially progressive and crucially, beautiful.

It was founded in 1977 by a group of printers who had been made redundant from an arts organisation. With no redundancy package, they took control of the printing presses to kickstart their own venture.

Arthur, one of Calvert’s 12 members, reminisces, ‘This was the days of the GLC, of punk rock and a kind of DIY attitude was in the air. It was around the time I moved into Sanford coop in New Cross. It was cheap and we didn’t have a landlord – it was brilliant’.

The original founders ruminated about their future over pints in the North Star pub, like all good revolutionaries.

A few centuries earlier in 1769, the Bold Defiance (silkweavers who organised a revolt against their reduced wages owed to the mechanisation of their trade) similarly plotted in The Dolphin pub, formerly on Redchurch Street. The pub has been repurposed as Labour & Wait, a shop which specialises in timeless utilitarian products.

This street was, perhaps prophetically, Calvert’s former home before its relocation to The Oval, thanks to rising rent. The Bold Defiance’s rebellion changed the course of workers’ rights forever.

Paying homage to Elizabeth and Giles Calvert – radical printers of the 1600s and the Civil War, whose literature was so scandalous it was punishable by execution – they landed on the galvanising namesake, Calverts Northstar Press.

The power of print

Print and design have long been part of the East End’s arsenal to successful activism, and it is one of the reasons why creatives and agitators flock here.

Is it possible to imagine the legacy of the civil rights movement, the suffragettes or more recently BLM and Extinction Rebellion without the good communicative imaging that roused us to the streets? Without it, who would know about these revolutionaries, and who would be inspired to join them?

With its artistry and mutinous proclivity, Bethnal Green seems to trade in starter packs for social change, having for instance pioneered the first social housing scheme built by a local government authority in 1890, Arnold Circus.

Power to the people

The success of social campaigns is often linked to how well they are embedded in the areas they seek to serve. The proximity of the printing house to the creatives they work with is significant.

‘It’s important that we work closely with our clients, so that we can collaborate all the way from an initial concept, to its design, documenting its progression on social media, and even arranging distribution to customers and beneficiaries. Creators can anticipate what their end product will be, rather than taking a (financial) leap of faith.’

The beauty of print is its tactility, and is its primary differentiator from the digital world.

‘Print is as much about texture and smell, as it is what you can see. It’s about how a material feels in your hand, and the sound of pages between your fingers. You can’t as yet express that through Zoom.’

Being located in the heart of East London means they are best placed to serve the community of which they are an intrinsic part, and in an environmentally efficient way.

‘We currently have a cargo bike to distribute things locally. But this is also about social sustainability. The high street is in decline, we have to support bricks and mortar businesses to work in the long term.’

Calverts print room is like a laboratory of endless possibilities. Colourful inks dropped in from above, the machine gurgles and splutters as paper is fed in one end and printed sheets shoot out the other.

The printer is enormous, requiring a lot of space – an ever increasing luxury. But it affords the cooperative the capacity to make bigger, more diverse and experimental works, and to create the interesting and beautiful objects that keep them in business.

Some of these works include The Right to Remain Asylum Navigation game, which helps users understand how to navigate the very cumbersome asylum process; a map of contested development sites in Tower Hamlets; and the East End Trades Guild map of independent businesses (image below). 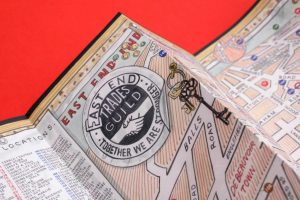 The demand for printing is on the up. ‘As people became dissociated from tangible things it’s invigorating to experience things again.

We have special papers made from seaweed, nuts, coffee and other plant bi-products. We use inks that are bight and punchy yet biodegrade when recycled. Matching the right story to the right processes and paper you can do interesting things that will differentiate who you are and compliment your unique story. There’s only so much you can do between one PDF and another’.

Keeping the fire alight Arthur chimes, ‘I love this area because of its interesting people. There’s a unique energy that creative people bring, striving for change and newness.

The collective power of cooperatives

It’s not only space and its location that sets Calverts apart. It’s a co-operative, meaning its 12 members own and control the company jointly and equitably: one vote per member. And even more radically, everyone is on the same hourly wage.

‘We make all our decisions collectively. It may take a little longer but they tend to be right, because you’ve probably given them more consideration than one person. It might mean we’re a bit more resistant to making quick decisions but we’re still here after 45 years.’

What does this mean in practice? ‘We’re not ‘not for profit’, but we’re not just for profit. So together we decide how that profit will be used, so it’s not concentrated in the pockets of shareholders or tax havens. We can invest in new kit and new processes. Or work with organisations that can’t otherwise afford it.’

It frees Calverts to choose who they work with, and who they don’t. We have autonomy to produce things that are socially progressive and actually make a difference in society.

In traditional ‘us’ versus ‘them’ hierarchical workplaces, people need someone to kick back against. You don’t get that here, because we’ve all been complicit in a decision. It’s a nicer as well as more business savvy way of working.’

The current political climate may not be so conducive to this practice, but Arthur is optimistic that it will return. As the likes of the East End Trades Guild shows – an alliance of independent businesses that Calverts is part of –  collective action has power and models a successful, alternative way of being and working.