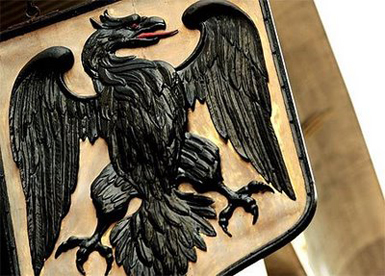 Radical seventeenth century publishers during the  English Civil war, purveyors of 'soul-poysons', members of the sect My One Flesh, imprisoned for printing books such as Richard Overton's The last warning to all the inhabitants of London and Lawrence Clarkson's ‘impious and blasphemous’ book A single eye – all light, no darkness, the Calverts operated from their print shop at the Sign of the Black Spread Eagle at the west end of St Paul's Churchyard in London, currently 54 Lombard Street.

Giles Calvert published Levellers', Diggers', Ranters', Quakers' and many other radical religious and political leaflets and suffered for it once governmental authority re-established itself. All of these publications would have stated their origins at the Black Spread Eagle so the association would have been made at that time with radicalism. His wife, Elizabeth Calvert, continued the work on a secret printing press after his death, and eventually the premises passed through several hands until it became the headquarters of what was to become Barclays Bank.

Leave a reply Click here to cancel the reply